In 1990s chemotherapy opened another door for cancer interventions. This has changed the prognoses of many patients and has given them hope of recovery.

Chemotherapy is based on the administration of cytostatic (limiting multiplication) and cytotoxic (eliminating) drugs via intravenous injections or infusions, occasionally as tablets, that are given under medical supervision for several minutes or hours in order to slow down the multiplication, and to eliminate rapidly multiplying cells – cancer cells. There are many drugs given during chemotherapy, some are of natural origin. The “cocktail” is always mixed according to the type and stage of cancer.

Chemotherapy alone as a primary treatment is selected only in a small percentage of cases depending on their type of cancer and its sensitivity to chemotherapeutic substances. Chemotherapy alone is very effective for leukaemia and lymphatic system cancers (Hodgkin’s and non-Hodgkin’s lymphoma), but the incidence of chemosensitive cancers of all cancers is less than 10%. Chemotherapy is more often used as a helping therapy called adjuvant which is combined with a surgical removal of a tumour and radiation; this applies prior to the selected primary treatment as well as afterwards to destroy potential metastases. Chemotherapy is very often used as a palliative solution for terminal diseases; even though it prolongs life by only a few months, it helps to a more dignified and peaceful death with a greater sense of acceptance. 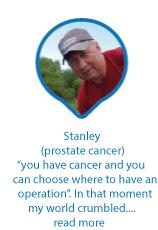 Unfortunately, chemotherapeutic agents (cytostatics) are so far unable to distinguish cancer cells from rapidly multiplying healthy cells, so chemotherapy targets even e.g. healthy bone marrow cells, intestinal tissue, reproductive organ cells or hair follicles. The negative impact on healthy cells is linked to many side effects. To give healthy tissues enough time for recovery after chemotherapy, the treatment is provided in cycles.

The most frequent and feared side effects include nausea, vomiting, diarrhoea or constipation and hair loss. A declining number of platelets is typical and related to increased bleeding (bruises, bleeding of gums, nose, blood in urine or stool), anaemia (reduction in red blood cells), fatigue, a weak immune system, and thus a greater susceptibility to infections. Some side effects can be suppressed by drugs administered frequently and as prophylaxis.

During cancer treatment it is important to adjust diet, limit sugar from which cancer cells draw energy and grow, to add vitamins and minerals needed, and to spend time outside on fresh air avoiding negative thoughts and feelings.