About the Biocol active substance 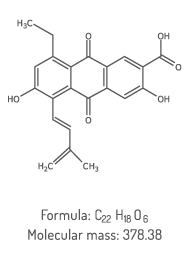 Biocol is a unique, patented, natural substance acquired from a complex biotechnological procedure and followed by standardisation in compliance with the most stringent hygienic and technological standards. It is a product of metabolism of the Talaromyces purpurogenus microorganism which shows a profound effect on the human body.

Talaromyces purpurogenus is a strain of genetically unmodified microscopic fungi, a natural microorganism which was discovered on the soil of the Ararat plain in Armenia during a screen testing in 1972. A long-term collaboration of scientists from medicine and biochemistry enabled to discover some unique microorganism characteristics. Its ability to produce red pigments and its original dynamics of biosynthesis and bioactivity was very different from other microorganisms being known until then. The more significant fact, however, is the final product of manufacture - the Biocol active substance which contains really precious bioactive agents that excel in their ability to positively influence the immune system. Further research and findings on this specific microorganism have revealed its potential to influence and inhibit the cancerous growth.

Biocol effects have been tested in many experimental and clinical trials which showed that it hindered the growth of tumors due to its impact on the immune system, which happens via the so called apoptosis, a process of programmed cell death.

The regulation of a cell life span is a precisely programmed mechanism. If harmony between the cellular division and its ageing process is disrupted, it may cause the cell to change from a healthy one to an impaired or cancerous one (i.e. oncogenesis). For organism's healthy functioning, its ability to normalise oxidation processes, including apoptosis, is important, because the failure to do so may lead to the onset of cancer. Biocol has an excellent ability to block the undesired oxidation processes and apoptosis, and to normalise the programmed death of impaired or damaged cells, in this way it contributes to lower the risk of cancerous growth.

Another beneficial property of Biocol is its ability to influence the function of B and T-lymphocytes (specific groups of white blood cells), that contribute to appropriate functioning of the immune system. Lymphocytes are body's essential cells, their dysfunction may lead to a so called immunodeficiency (weakening of the immune system) or to the onset of autoimmune disorders.

B-lymphocytes excel in their ability to identify foreign microorganisms (antigens) in the human body and consequently to create antibodies (specific proteins) that are capable of fighting against the antigens.

T-lymphocytes on the other hand, eliminate (engulf) the foreign cells directly, including damaged or cancerous cells, and cells affected by a virus, in this way they ensure cellular defence. The most significant subgroups of T-lymphocytes affected by Biocol are marked as CD4+ and CD8+.

CD4+ lymphocytes called helpers aid the other lymphocytes to take part in the immunity process in 2 ways: their ability to engulf damaged cells (cellular immunity) and to produce antibodies against those cells. This is why their impairment results in a reduced resistance of the body.

CD8+ lymphocytes called cytotoxic cells contribute to the killing and elimination of diseased cells. They are able to force such cells to apoptosis (programmed death) or eliminate them by their own mechanisms. By doing so, they contribute to anticancer immunity.

A ratio between these groups of T-lymphocytes is important; it is expressed by a so called immunoregulatory index. This index tends to be prominently reduced in some viral infections (e.g. AIDS), and its lower values are associated with an immunopathological state, i.e. body's low reactivity to pathogenic (foreign) agents.

It promotes an adequate functioning of the digestive tract - it regulates stomach acidity and boosts the required intestinal microflora, it also adjusts stool (diarrhoea, constipation). This positive influence on the digestive tract can be utilised when treating stomach or duodenal ulcers, Crohn's disease, coeliac disease, ulcerative colitis, diverticulosis or colon polyps. These diseases are most frequently associated with the disruption of mucosa due to inflammation, hence appropriate immunity support with the smooth functioning of the digestive tract may limit a malignant reversal.

Biocol is also used in gynaecology, where it counteracts adverse effects of the microorganisms in vaginal mycoses or HP viruses that may cause precancerous changes in cervix, or genital warts. By harmonising the individual organ systems Biocol contributes to the organism's healthy functioning and general well-being.