Milena - ovarian tumour
As my disease began to be treated relatively late, I was forced to arrange a lot of my examinations myself at first. The last one revealed that I had an ovarian tumour. The treatment only started last year. From October to December 2020, I had three chemotherapy sessions. I was told the tumours would grow smaller but then a stoma was required because, as I wrote, “my intestines fused together”. ........ read more

Every year ovarian cancer affects over a quarter of a million women worldwide, more than half of them die. This type of cancer has the highest mortality rates of all cancers due to unclear signs and symptoms and poor diagnostics. Primarily women over 50 are at risk of ovarian cancer.

How does Penoxal help in ovarian cancer?

Cancer affecting ovaries and rare tumors of fallopian tubes are similar in many ways. The so called epithelial tumors (of superficial covering cells) account for 90% of ovarian cancer cases. Even though the exact cause is unknown a great factor (similarly to uterine cancer) are sex hormones oestrogens causing the female gametes (eggs) to mature in ovaries. Changes to eggs during their maturation may be limited by hormonal contraceptives that decrease the risk of the disease, while also increasing the risk of many other diseases. Genetics also play some part, more susceptible are women with a special gene mutation which incites breast cancer and another type of ovarian cancer manifested primarily in women younger than 40. Other types of ovarian cancer are more common in women after the menopause, often aged above 60. Drugs for infertility, a weak immune system, smoking and alcohol consumption are high-risk factors of the disease.

Ovarian cancer is often asymptomatic, in advanced stages it may lead to abdominal pain, fluid accumulation in the abdomen (ascites) and associated bulging of the abdomen; frequent urination, constipation, feeling of fullness, loss of appetite and vomiting also appear. Signs and symptoms mentioned do not necessarily indicate a malignant tumor; however, they are a reason to visit a gynaecologist. 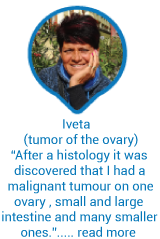 There are very few methods that may reduce the risk of ovarian cancer. As the evidence has shown the risk is reduced by a diet rich in vegetables, by the use of hormonal contraceptives (that also carry other risks), pregnancy and a long-term breastfeeding, by a strong immune system or the radical tubal ligation (reducing the risk up to 70%).

Impact of the immune system on ovarian cancer

For the rather silent and inconspicuous disease such as ovarian cancer it is necessary to maintain a strong immune system which prevents tumor growth. A regular boosting of the immune system is needed, because a weak immunity has no chance to defend itself from the multiplying harmful microorganisms that may compromise the female body so much that it stimulates cancer-causing uncontrolled cell division in ovaries. Moreover, as female organs are so sensitive and prone to diseases, they require the strongest immunity possible.