Ulrike - chronic fatigue
For 13 yrs now, I am suffering from fibromyalgia, chronich fatigue syndrom and chronic ebstein barr - and other chronic viral infections. For 2 weeks now, I am taking Penoxal and it is unbelievable but totally the truth. I feel much more energy inside of me and much less fatigeu! For example I can do much faster walks , even uphill, where I normally had to stop all the time, breathlessly. ........ read more 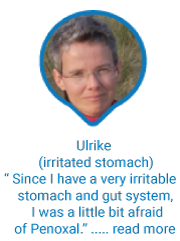 In terms of cancer, it has been suggested that 5-10% are caused by genetic predispositions. So in 90% of cases cells undergo changes during their lifespan due to the way of living. Mutation of a very important gene that usually results in cancer may affect individuals of a very young age. The most common cancers due to inherited faulty genes are breast cancer, ovarian cancer and colon or uterine cancer.

If cancer appears in a family and indication criteria for testing are met, the genetic testing is covered by a health insurance company. Of course it is possible to get the test despite the negative or a low-risk family history based on evaluation of a clinical geneticist, but at one’s own expense.

A strong and healthy immune system resists diseases despite genetic predispositions, thus immunity forms a basis of good health. The likelihood of cancer or another disease with inherited genetic mutation is affected by many other factors including the body’s resistance. People with the higher genetic load are recommended to strengthen their immune system regularly, so no minor viral disease becomes a serious condition. In order to boost the immune system we should follow the general principles of a healthy lifestyle that may be difficult to fulfil completely, or they may not be effective enough due to negative factors. Therefore, to enhance immunity by natural food supplements is nowadays in demand, and it will always guarantee good outcomes. Moreover, remedial substances extracted from nature should be fully utilised by people with no genetic load as the adverse factors of the modern world are countless.