Home/Iveta Markova, Czechia - tumour of the ovary and large intestine

Iveta Markova, Czechia - tumour of the ovary and large intestine 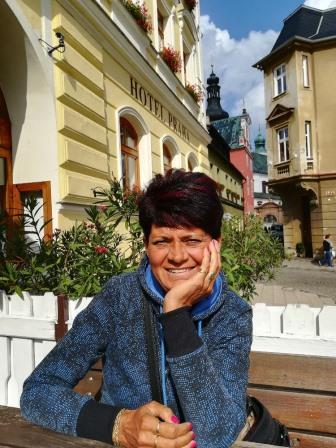 Same as anyone after finding a serious illness, I was looking for anything that could help me. I had suffered inexplicable abdominal and back pain for several years back. At the beginning of 2018, I began to notice weight loss and I was very tired. Finally, after my insistence, I asked for an abdominal cavity ultrasound examination. It was discovered that it was reportedly a gallbladder, which was then undergoing surgery in April 2018. However, during surgery, the nerves in both legs were damaged from my knees down. I couldn't feel my legs. I couldn't walk properly, my legs buckled, jumping like locusts and kicking them forward in a karate style. I was told it was called rooster walking. Stomach aches and back pains increased.

Because nothing was improving, I was hospitalised at neurology department, where I was on drips all the time. After a week of treatment, I was released and I started rehabilitation. Here they showed my husband the exercises and massages we should do at home to improve my health. I was unable to move without crutches, I had dizziness and stability problems. My back and abdominal pains continued and my weight decreased (about 20 kg in 4 months). I couldn't eat anything due to the pain and I became worried and desperate. My GP claimed that it would return to normal and my back and abdominal pains would go away, but they didn’t. Therefore, I didn’t hesitate to make an appointment with another doctor (gastroenterologist), where I regularly attended. When he saw me in my condition, he knew something was wrong. Immediately, he sent me for a CT scan, where after a histology it was discovered that I had a malignant tumour on one ovary, small and large intestine and many smaller ones in the whole abdominal cavity.

I was immediately sent to an oncology clinic. I met my former co-worker there, who also happened to have cancer, and it was her who recommended that I try PENOXAL. I was a little surprised by its high price. However, I read the reviews carefully and therefore ordered it before undergoing chemotherapy. Chemotherapy, however, didn’t work. For this reason, as a last resort with an uncertain outcome, I was scheduled for surgery in January 2019. I had been taking PENOXAL for 3 months by then. Unfortunately, the disease was at such a stage that a part of the small and large intestine was taken out and an outlet from the small intestine (ileostomy) had to be formed.

I take Penoxal daily, except the time when I was in the ICU department. I mentioned it to my surgery doctor, who approved it, had no problem with it. I also went to a nutritional counsellor to do something about my almost malnutrition. I gained weight and my weight stabilised. Now after a year of use, I can say with confidence that it was a very good decision. I used to be very tired, as if I had no energy, I even underwent chemotherapy without difficulties. Too bad it didn't work. After surgery, I didn’t undergo any other, as my kidneys didn’t take it very well. Immunity has improved, I seem to be avoiding flu and colds. Blood results have improved a lot. I have an appetite. I gained 20 kg, and I feel good. I firmly believe it’s thanks to PENOXAL. Thanks for it and thanks for the colleague who recommended that to me!

The story outlined is true and it was written by Iveta. Would you like to share your story too? It will help others to decide and we will gladly reward you for it. SHARE YOUR STORY

How does Penoxal help in tumour of the ovary?