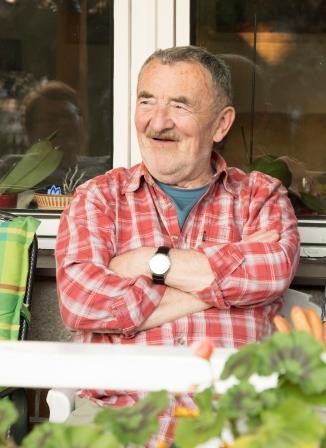 Up until the age of 72 my father (now 75) had lived an active life and always did lots of physical labour as he owned his own pottery. Then he caught cold, got a severe case of bronchitis and pleurisy, and had to be hospitalised for several months, at the ICU no less. Hospitalisation was very difficult for him mentally, which could be the reason why, even after his good health returned, a mysterious growth suddenly appeared on one of his tonsils. It wasn’t painful but made it difficult to swallow. Dad was examined at the ENT ward and underwent a biopsy which yielded pretty horrific results—a carcinoma! Terrified, we started preparing Dad for an acute surgery at the ENT surgery ward.

After checking into the hospital, a detailed histology report arrived, changing the diagnosis—the growth wasn’t a carcinoma, but lymphoma. The treatment strategy immediately changed. Dad was quickly moved to the Haemato-oncology ward and underwent an acute PET CT which revealed pleural nodules and affected spleen. The lymphoma was growing rapidly and could soon obstruct his breathing. For this reason, immediate treatment at the Haemato-oncology ward was required, consisting of several chemotherapy cycles. I was worried Dad might not be handling the treatment well, especially after his stressful stay at the hospital where he got weaker, therefore I began looking for a supplement to aid the treatment and limit the chemotherapy’s side effects. I searched online and found… Penoxal.

I read the doctor’s reports, patients’ experiences, recommendations from pharmacists, and came to the conclusion this was the right supplement to promote Dad’s immunity and treatment. I work as an intensive care nurse myself, so I wanted a product recommended by the professional medical community. Thank God, I made the right choice. Dad began taking Penoxal as soon as his chemotherapy started—50 mg 4 times a day for 4 months, as recommended. I believe Penoxal was one of the reasons why he felt more or less normal throughout his haemotherapy, just a little more tired than usual. He didn’t suffer from nausea, didn’t vomit, and his appetite was good. After eighteen months treatment, he underwent a new PET CT, an examination at the ENT ward, and gastroscopy check-up—nothing was found in his throat or anywhere else in his body. The only thing the doctor recommended was observation and regular check-ups at the haemato-oncology ward.

Dad feels so well he says it’s like he never even had cancer. So, when a devastated friend told me her daughter had a breast carcinoma, I immediately told her about Penoxal and recommended it. I hope that Penoxal, taken 4 times a day, will also help her daughter to defeat her insidious disease. I bought one pack of 120 capsules to deal with my own myoma issues, and expect only the best of results.

Thank you and kind regards, Marie

The story outlined is true and it was written by Marie. Would you like to share your story too? It will help others to decide and we will gladly reward you for it. SHARE YOUR STORY

How does Penoxal help in Tonsillar lymphoma?