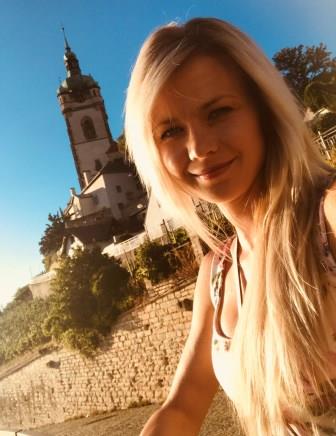 Ever since 2016, after I gave spontaneous birth twice, I became aware of a pain in my lower abdomen, appearing and disappearing again all of a sudden. I had no idea what could be the cause. The pain was very unpredictable—sometimes strong, at other times weak—and nothing could supress it. After a few years I began to notice the pain would pop-up roughly around the time when I was supposed to get my period or ovulate. It became so intense that I had to stop going to work at “that time of the month”.

I kept consulting my issues with my gynaecologist who only ever told me they were normal and recommended contraception, preferably taken until the end of time. She also advised me to go for a laparoscopy which only promised to yield uncertain results. But hormonal contraception always made me very sick, both physically and mentally—it gave me migraines, anxiety, and flashes of anger. In 2018, it was recommended that I have the Mirena IUD inserted. After its application, I essentially spent a year menstruating, suffering from daily pains and poor mental health, until I finally had cervical conisation and had the IUD removed. The pain became more intense. Then the coronavirus pandemic arrived and my treatment was postponed.

I was suspected to be suffering from endometriosis which unfortunately can only be diagnosed with a laparoscopy. As “trivial surgeries” had stopped being performed, my pain was becoming more intense with each passing month, and so I started looking for any solution, possible or impossible.

Finally, I stumbled upon Penoxal online. I was sceptical but then I read the testimonials and experiences of real people, deciding they were fantastic, even impossible. My doctor then recommended I take Penoxal and I have to admit it has helped a lot. Not only did the pain subside and ultimately disappear altogether, but I also feel more energetic and my legs have also stopped swelling. I’ve noticed my skin became clearer, as well as other benefits. It’s a small miracle. I’m grateful for the supplement and intend to keep using it because it greatly helps me fight pain, both weak and intense. I wish everyone to stay strong as they deal with any chronic pain they might be having. I definitely recommend Penoxal to everyone.

The story outlined is true and it was written by Jane. Would you like to share your story too? It will help others to decide and we will gladly reward you for it. SHARE YOUR STORY

How does Penoxal help in gynecological problems?